Is it ok to cannulate an aneurysm?

I have been on HHD for 15+ years. I have been using buttonholes the entire time. I have a short area for cannulation though. There’s an aneurysm that is there in one area of the arm. I use a pair of sites for cannulation and often don’t have place to create a new site. I was wondering if cannulating an aneurysm is a strict no-no? Or is it ok under some circumstances? Anything to do to make it safer? Thanks!

Sorry Stuart. I am unable to figure out how to measure it. But I am attaching a few pictures that will show my fistula and the aneurysm. 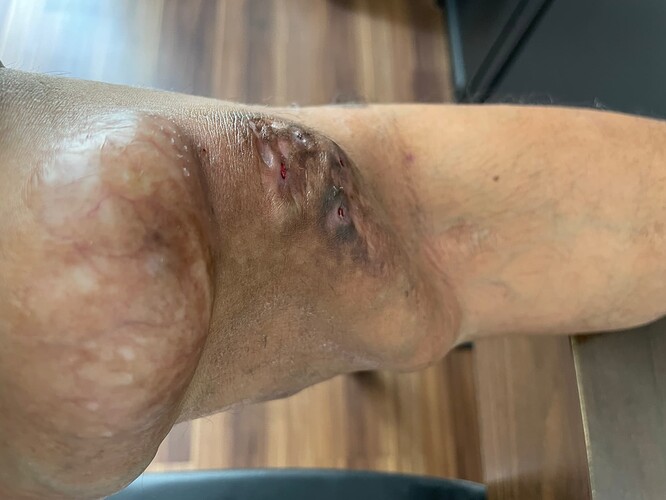 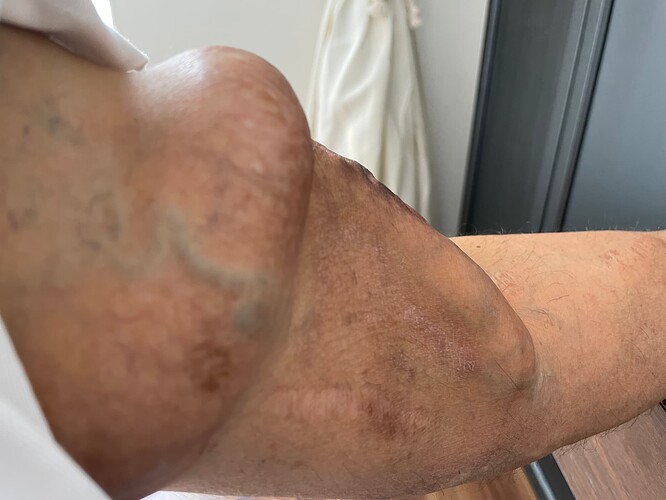 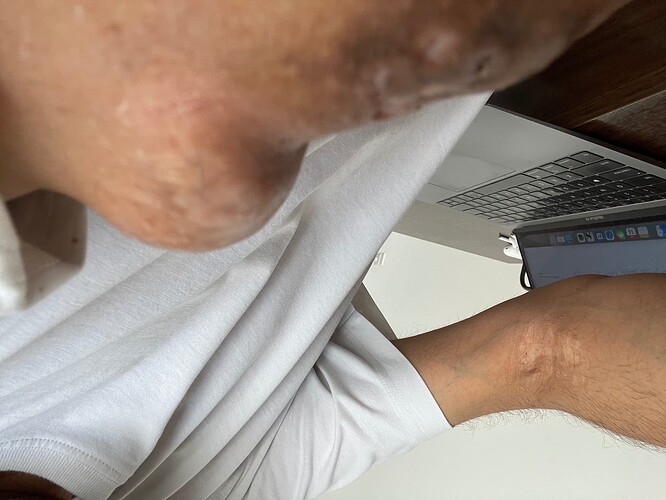 New CMS standards for 2013 create a challenge for many hemodialysis units to achieve at least a 66% permanent access of AV fistula (AV/f) or graft. Currently, three to six years is the average length of time before intervention becomes necessary with an AV/f. The unintentional formation of aneurysms can occur due to a number of different reasons. Limited/minimal areas for cannulation; high blood flow rates; access placement too close to the surface of the skin; skin break down; bleeding times; and timing use of the access can all affect and contribute to aneurysm formation. Aneurysm development usually leads to the patient undergoing a graft by-pass or revision surgery, which can lead to further complications such as limited life-time use of the access; clotting; infections; and other associated problems leading to potential use of a central catheter. A study done at St Michael’s Hospital in Toronto, Canada in 2006 demonstrated that the use of the buttonhole cannulation technique has the potential to extend the life of fistulas that have developed aneurysms. In fistulas with marked aneurysm formation and thinned overlying skin, buttonhole tunnel tracks were created at the base of the aneurysm where there was noted to be maximum skin integrity, and by avoiding intra-aneurysmal thrombus through the use of ultrasound (Marticorena, XXXX).
The author was introduced to this technique in the winter of 2011 by Dr. Shenoy from Washington University in St. Louis (see photo 1). The process used by Dr. Shenoy involved one cannulation nurse using the free style of cannulation and the wings of the cannulation needles to establish a buttonhole track.
Our clinic began using this method in an effort to save fistulas with aneurysms. Instead of using only the buttonhole technique, we decided to utilize both the “cushion cannulation technique” in conjunction with the “touch cannulation technique” using a yoga block to support the arm during touch cannulation. Staff were taught to use their index finger as a guide to establishing where the best area would be to insert the needle with the aneurysm. By laying the index finger on top of the needle, staff are able to estimate the width of the cannulation tunnel once developed (Side Bar Cannulation Technique). In the author’s case the index finger is ½ inch wide so by placing it against the side wall of the aneurysms it would be ½ inch from the aneurysm’s wall. It is important to stay at least ½ inch from the sides of the aneurysm so that the buttonhole track has room to develop (see photo 2). Our clinic taught the staff to use their finger to press up against the side wall of the aneurysm and mark with a marking pen to set the position and distance from the aneurysm base (see photo 3). All cannulations were performed using a minimum of a 45 degree to 75 degree angle to the blood flow as others have done. The yoga blocks used were cut to varying length and height depending on the site selected for cannulation. None of the cannulations performed by our unit exceeded a 10 degree angle for cannulation. This was done to ensure a minimumal amount of jet blast to the upper wall and to the other sides of the fistula wall. This created a learning curve for the staff as this was different from what they had been previously taught regarding the 20 degree angle for buttonhole cannulation. Within a month, the author and staff noted a decrease in the size of aneurysms and in order to quantify these observations, began measuring the circumference around the largest part of the aneurysm. In one instance before beginning to track measurements, staff noted that one patient had their aneurysm return to a flattened state in less than a two month period. Other patients experienced a decrease in aneurysm size by 30 to 50%. During this study, our unit did not see progression or growth of any aneurysms through the combined use of cushion cannulation and buttonhole technique; in two cases it was noted that shrinkage and remodeling of the fistula occurred whereas shrinkage of the aneurysms were noted in all cases.
Supporting the Canadian study, our unit also noticed bleeding times were shortened to less than 5 minutes as well as skin integrity being reestablished.
By maximizing positioning through cushion cannulation and touch and buttonhole cannulation techniques, it is our hopes that dialysis units can increase the life of a patient’s AV/f as well as improving their quality of life by decreasing the size of aneurysm formation, reducing bleeding times, and decreasing the pain of cannulation.

is anyone in your group using fistassits?