What did you have for breakfast?

I’ve always been interested in what other patients ate…

I had Steak seared in a Iron skillet and scrambled eggs with goat chevre and a slice of a bagget with salted butter and fruit spread.

I’ve always been interested in what other patients ate…

I had Steak seared in a Iron skillet and scrambled eggs with goat chevre and a slice of a bagget with salted butter and fruit spread. 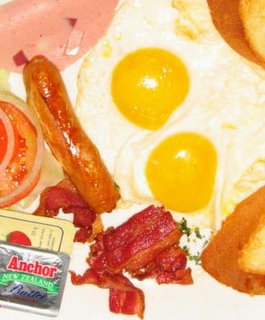 em’ apple pie. I recently learned how to make cobblers. What a great thing. I made an apple one the other day and it was YUMMY
LSB

Organic weetabix (do you have that there?) with organic milk, org tea - milk & brown sugar. 2 slices organic bread & butter.
Sometims I’ll just have cereal, with milk & sugar, varies may be muesli, cornflakes.

Sometimes I’ll have a Full english breakfast, esp if there are guests,
Bacon, egg, sausage, beans, optional mushrooms or tomato, & lots & lots of hot buttered toast, white or brown. Some people add hash browns, not my favourtite dish. Usually fried but you can alter, to grill sausages, bacon etc & scramble or boil egg rather than frying.
Usually known in English Cafe’s as a ‘number 1’ a number 2 is everything doubled!
Lots of variations to English Breakfasts I have to say I haven’t had a decent recently!

JW77, my goodness! Quite an appetite there…do any of you really have a great appetite? Any difference between home dialysis and in-center…appetite the same?

Cup of tea, fresh fruit salad, muesli and yoghurt or multigrain toast and baked beans, occasionally an egg if I can disguise it so it doesn’t resemble its former life. Yesterday had a big bike ride with friends and we then polished off BLT’s with avocado, fresh fruit juices and coffees. Yum! 8)

Appetite greater home than in-center, Gus. Greater again on nocturnal.
Post nocturnal, I’ll have a couple of eggs’n’toast or toasted muffins.
(If it’s a monthly bloods night, I’ll go to McDonald’s & have Sausage’n’egg McMuffin, after dropping off the test tube at QML.) Maybe some yoghurt. Maybe weetbix…I got out of the cereal habit for a while, thinking “what a waste of my fluid allowance” with all that milk. Then I remembered that I often used to give our previous dog (an O.E.S called Wilfred - his ashes are on the cabinet) the milk left when I finished eating the actual cereal. So I now do the same with Bertie the Mareema.

On work days I grab a toasted cheese,tomato & onion sandwich or a bacon’n’egg muffin from the take-away in the shopping center where I park. I have actually tried to cut down my evening eating a bit…and my target weight is now down to 127 and falling. Once I’m back in the pool in a few weeks, this should accelerate (I hope :roll: ) I’m determined to get under 120kg before Xmas !
Yesterday morning my wife brought us down a couple of tender rib-eye fillets, cooked onions & mushrooms & fresh bread rolls to eat it all in while we were still having our SUnday morning lie-in!! U beautie!!!

Gus, yes I do have a good appetite right now… I think appetite on heamo is better managed now then it used to be. Possibly due to the invention of EPO injections & giving IV iron as well. It really means your a lot less likely to be anemic. Once I got stable on haemo after last year I’d say my appetitie is better than its ever been for years!

Thats on in unit haemo for 3.5 hours/ 3 times a week.
I just need to put in more exercise!

As I said, I rarely eat a cooked breakfast. Just trying out rice milk instead of dairy as I am on limited diet. It’s not bad! All the fresh potatoes & veg from the allotment are too tempting:) Although some crops haven’t been so good for us… Sweetcorn, which I love, just hasn’t produced.

We’ve recently put pressure on our Fresenius clinic to get some decent sandwiches provided & it looks like we’ve won! Hopefully.

It’s amazing the difference a chat with the area manager can make !!