My dad’s treatments always end with a clear dialyzer. Not even the slightest hint of reddish-pink left in the dialyzer upon completion.

Last night, after the full 277 units of fluid returned his blood and ended, there was blood in the pressure pod and places throughout the tubing but most concerning is that the dialyzer was not only streaked and tinted pink, the pig tail end with the blue clamp looked as if there had been no return of fluid. I honestly have never seen so much blood produxt on the cartridge after treatment.

I do not remember what the streaking in the dialyzer means. Anyone able to remind me? 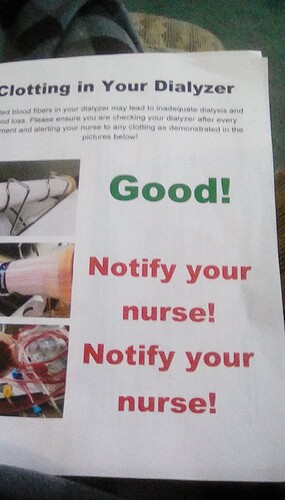 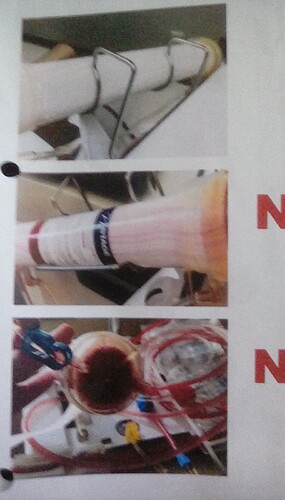 Here are pictures of a paper given to me by my nurse.
When I am finished dialyzing my dialyzer is usually between the top and middle pictures. I am using the NX Stage equipment.
I believe that the streaking is related to how much heparin is administered prior to dialysis, I would contact his nurse an let them know.
I am sure that they will help you figure out how to correct the problem.
Good luck, I hope that this helps, Rob.

Thanks for your reply Rob. That does help. I began responding to you earlier during the week but have been non-stop since. Literally. Your pictures confirm what I see on my end. I will attempt to attach mine below.

Since my post, of course, I have been in contact with my dad’s PCP, Nephrologist, cardiologist and Hepatologist. That’s quite a team to keep up to speed. I did not post my initial concern as to why this may be occurring but I will here. And I’m not trying to be political here, I’m just trying to share my experience and perhaps another can chip in advice or thoughts or maybe just take something away from what I share. I understand there are many different thoughts, ideas, opinions and what not around this covid19 - I prefer to go only on what I can confirm to be true. So, here goes:

2 weeks ago, a man that I’ve known my whole life who we’ve always gone to church with comes by the house to visit with my dad. Every Sunday someone comes by and brings him communion and visits between morning and afternoon service. He just isn’t quite up for getting up, ready and out for several hours as he once easily could. The church is 30 miles away so a one hour round-trip. Now this man is ready nice. Always had great respect for him. In fact, he and I are similar in that we both take care of our fathers and their dialysis needs. But his father was in-center. My dad is home hemo. Sadly, his father passed away about one year ago now. I happened to be out doing yard work during the visit and he shared with my dad that he had finally given in and gone to have “the injection”. I don’t know why or what prompted him to do so, but he did. And I have to assume that because this man is a big larger - not as he once was, he had the lap band surgery some decade or more ago - but he’s a bit more full through the body so I assume the dosing for him was larger than for most. I can only assume this part. Thankfully, I was outside during their entire visit so I do not feel that I had been jeopardized. What do I mean by jeopardized? Continue on and I’ll explain.

So, as most should know or be aware of at this point, the mRNA component of these injections deliver a message to our RNA/DNA (double sided helix) and direct the production of s,-proteins or spike proteins which mimic Corona virus creating immunity. That’s the short version. But spike proteins are not healthy and are toxic to us. They claim to have initially believed the injection would remain in the deltoid, do it’s thing and that would be that. However, what actually happened is that up to 75% of the injection actually made it’s way into the circulatory system and spread around the body as indicated by the biodiisribution reports. That’s a different chapter of this problem but these spike proteins are developing all around the body at an unknown rate and no one knows for how long or if it will quit or if it ultimately is an intermittent thing. We just don’t know. There are no well grounded, established and repeated studies in the use of mRNA technology vaccines in humans. Sadly, the animal studies were far less than favorable.

So, that was Sunday. Now, it’s Monday night, just at or under 24 hours later. Upon completion of treatment, this is what I find: 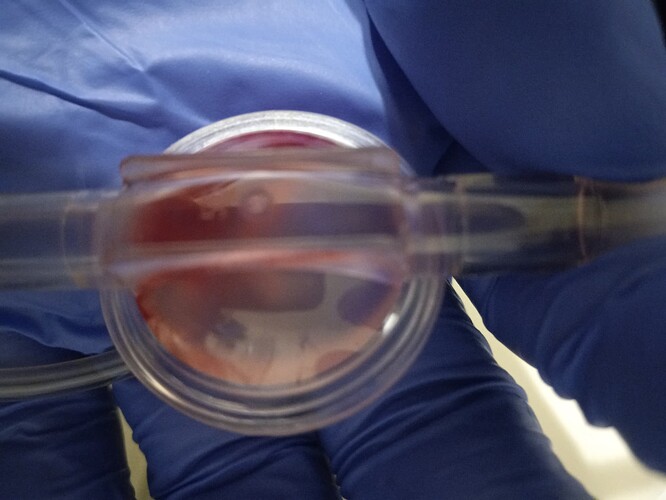 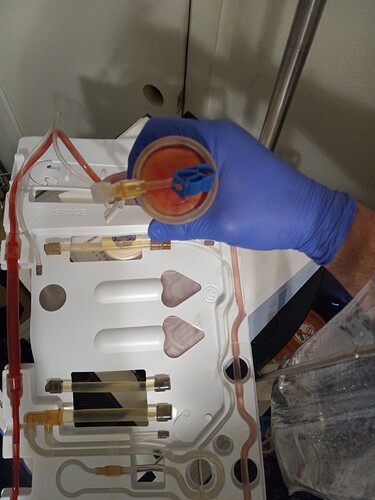 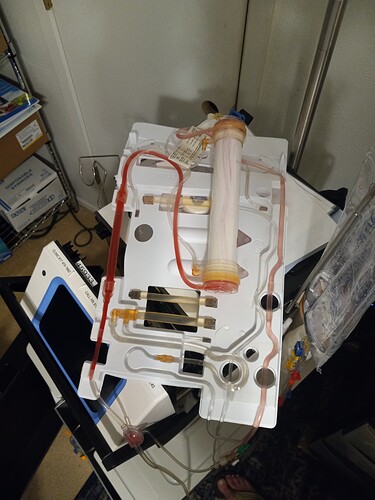 Clearly, we’ve got an issue with some clotting and streaking. Why? I can only speculate. Historically, my dad’s treatments finish up perfectly clear with no streaking or clotting whatsoever. This is a first. And it seems like possibly there could be a potential that this man from. church may be shedding these spike proteins. I know they say that transmissability is not an issue but with research, the experiences can be found and Pfizer specifically addresses transmissability in their documentation. Page 67 on the following PDF for the Pfizer mRNA injection:

Throughout my research, I’ve learned that the spike proteins can and often do result in microcoagulation of the blood. A d-dimer test is what will determine of there is clotting occurring for example to determine if a clot may be a pending emergency be it in the lungs, the legs wherever. I took my dad for a d-dimer test and sure enough, his d-dimer is elevated to 1.94. The standard is 0.50. And to be fair, my dad has heart, kidney and liver disease which all 3 can produce elevated d-dimer so this is not surprising to doctors. But honestly, I’m having trouble convincing myself that his heart, kidneys and liver decide to reveal themselves in this wY - less than 24 hours after my dad has been in close contact with a man who’d recently received this injection. I mean I suppose anything is possible.

Since this has started, his nephrologist has had me begin administering 2mL heparin pte-dialysis via his venous line. But it’s been increased to 4mL. We’re having trouble keeping his blood pressure up. He had been taking 5mg midodrine 3x daily but we’re now also taking 15mg midodrine 30 minutes prior to start of treatment and 10mg midodrine half way through treatment. By doing this his blood pressure managed to maintain 90 something/x without crashing out. Absent the midodrine, we’re talking a blood pressure of 68/45 and a hr of anywhere from 100-116. 2 nights this week we had to stop treatment early. Last night we completed successfully. One other recommendation that I tried out was reducing the dialysate temperature to 8 on the pure flow user maintenance settings. If or how much this helped, I can’t say. My dad didn’t freeze and he’s generally frozen during and after dialysis.

My dad is scheduled for an echo next Wed 9/22 so maybe we’ll have some light shed on all of this. My dad has really been lethargic all week, minimal appetite and generally just “blah” all week.

I hope this weekend is good. Fingers crossed and a few prayers and it should be. Thanks again for your response. It indeed was helpful.

I’ve seen dialyzers with streaking in the fibers and dialyzers that are clotted. It sounds like your dad’s nephrologist suggested slightly increasing his heparin dose, which seems like a good thing to suggest. Has that resolved the streaking in the dialyzer?

Many people have questions about COVID and the vaccine. Your father’s doctor would be the best one to answer your questions about your dad’s risk from socializing with vaccinated and unvaccinated people and the risks and benefits of the vaccine based on his health status.

“End-stage renal disease (ESRD) is a condition in which kidney function has permanently declined such that renal replacement therapy* is required to sustain life (1). The mortality rate for patients with ESRD in the United States has been declining since 2001 (2). However, during the COVID-19 pandemic, ESRD patients are at high risk for COVID-19-associated morbidity and mortality, which is due, in part, to weakened immune systems and presence of multiple comorbidities (3-5). The ESRD National Coordinating Center (ESRD NCC) supports the Centers for Medicare & Medicaid Services (CMS) and the ESRD Networks†,§ through analysis of data, dissemination of best practices, and creation of educational materials. ESRD NCC analyzed deaths reported to the Consolidated Renal Operations in a Web-Enabled Network (CROWNWeb), a system that facilitates the collection of data and maintenance of information about ESRD patients on chronic dialysis or receiving a kidney transplant who are treated in Medicare-certified dialysis facilities and kidney transplant centers in the United States. Excess death estimates were obtained by comparing observed and predicted monthly numbers of deaths during February 1-August 31, 2020; predicted deaths were modeled based on data from January 1, 2016, through December 31, 2019. The analysis estimated 8.7-12.9 excess deaths per 1,000 ESRD patients, or a total of 6,953-10,316 excess deaths in a population of 798,611 ESRD patients during February 1-August 31, 2020. These findings suggest that deaths among ESRD patients during the early phase of the pandemic exceeded those that would have been expected based on previous years’ data. Geographic and temporal patterns of excess mortality, including those among persons with ESRD, should be considered during planning and implementation of interventions, such as COVID-19 vaccination, infection control guidance, and patient education. These findings underscore the importance of data-driven technical assistance and further analyses of the causes and patterns of excess deaths in ESRD patients.”